Dr. Anwara Begum obtained her Ph. D. from the University of Liverpool for her thesis on "Poor Rural Migrants to the City of Dhaka" in 1995. She published "Destination Dhaka-Urban Migration: Expectations and Reality", in 1999 and "Engendering Garment Industry" in 2006 from the University Press Limited, Dhaka. She is basically an urban planner specialising in housing and migration issues (internal and international) and she has delved intensively into development issues including theoretical frameworks on migration for developing countries. She has considerable experience of quantitative and qualitative data compilation and analysis. She has conducted extensive surveys on the poor, especially the pavement dwellers and the slum dwellers. Her large-scale primary surveys of nearly 3000 respondents on the hard-core poor in urban and rural areas were done through head-count methods, stratified random sampling measures, structured questionnaires including case studies and FGD, rapid transect walk, and reconnaissance survey techniques. She has also collected primary information for the informal service sector workers (ESCAP report, 1996). She has worked as an International Consultant and authored, along with another colleague from BIDS, the first Global MDG report for Bangladesh, in January 2004, which was commissioned by the UN Secretariat. This Millennium Project which was commissioned by the UN Secretary General, brought together nearly 300 experts from around the world and was directed by Prof. Jeffrey Sachs. She has also authored the report "Follow-up to United Nations Global Conferences Bangladesh 1997-1999." She has worked as a Consultant for Social Safety Schemes for UNDP in 2005 and as Co-Researcher for the UNFPA funded project "Promotion of Responsible Healthy Reproductive and Sexual Behaviour among Adolescents in Bangladesh" in 2006 as the gender specialist. She has worked as a consultant for the World Bank, IOM, UNIFEM, UNDP, NORAD, SDC, UNICEF and DFID. She has worked as a National Consultant for Mid Decade Review of EFA 2005 and two thematic papers (Women and Children's Advancement, and Health in Relation to Water and Sanitation) as Technical Consultant for the Bangladesh PRSP I, and subsequently as National Housing Consultant for PRSP II. For the last 19 years, she has been an active researcher on rural, urban and international migration, having a wide interest in development issues: female entrepreneurs, gender equality and empowerment of women, employment and income programmes, rural and urban area development priorities, formal and informal industry worker conditions, informal service sector and poverty issues, housing and settlements and the problems of social and economic deprivation of urban and rural poor dwellers, formal and technical education, human resource development and rural-to-urban migration. 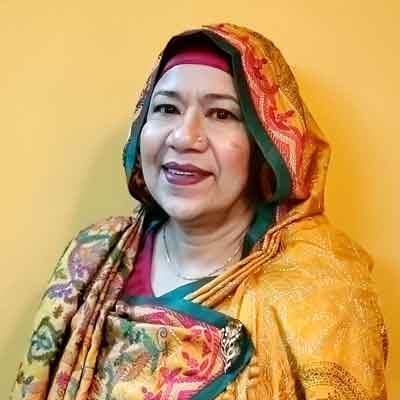