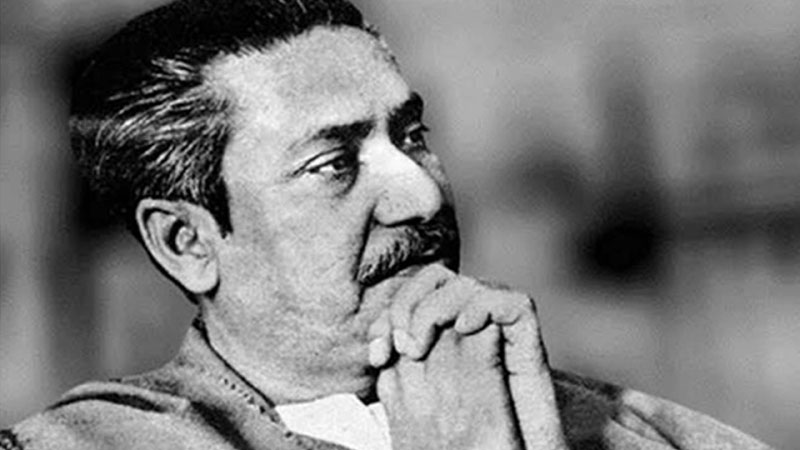 The Four Pillars of the Constitution: Vision of Bangabandhu for Independent Bangladesh

Pledging that the high ideals of nationalism, socialism, democracy and secularism which inspired our heroic people to dedicate  themselves to, and our brave martyrs to sacrifice their lives in the national liberation struggle, shall be the fundamental principles of the constitution.” ( cited from the last paragraph of the ‘Proposal to Declare Independence’ by Bangabandhu Sheikh Mujibur Rahman)

BIDS organized an online remembrance meeting observing the National Mourning Day, on Aug 16, 2020 at 11:30 AM, paying heartfelt tribute to Father of the Nation Bangabandhu Sheikh Mujibur Rahman on his 45th anniversary of martyrdom. The memorial meeting was chaired by Dr. K A S Murshid, DG, BIDS.

The keynote speaker in this meeting Dr. Binayak Sen (Research Director) reflected upon “The four pillars of the Constitution: nationalism, socialism, democracy and secularism” pledged by Bangabandhu in 1972. Bangabandhu’s carefully considered thoughts on “Democracy” and “Socialism” blended together in these “fundamental principles” where “fundamental human rights”, “freedom of expression and thoughts” and “secularism” came together to provide the high ideological plateau from which the country could proceed to embark upon its development story.

Bangabandhu’s economic philosophy was different from both Capitalism and the New Economic Policy (NEP) of Lenin. He clearly understood the reality of the Bangladesh Economy at that time, suffering from a shortage of a “managerial class” to operate the state affairs and the absence of a capitalist class that could work with the State. These two problems were clearly identified in the “New Industrial Investment Policy, 1974”, following the first five year plan. His Economic vision was based on a “sense of realism” within the context of a mixed economy (as stated in Section 13 of the Constitution) - providing the basic framework for the economic development of Bangladesh. BIDS remembers the Father of the Nation Bangabandhu Sheikh Mujibur Rahman as the architect of the country’s independence and economic development.

Dr Murshid drew upon his personal experience with Bangabandhu and, and in particular with Sheikh Kamal, whom he knew well. He recounted the atmosphere of that troubled era, the threats faced by Bangabandhu from both the left and the right, and the continuous efforts of the ‘enemies’ to undermine the new nation. He also shared new insights into who the perpetrators of August 15 were, and the havoc that resulted from the sudden demise of the Bangabandhu. How history would have been shaped if the Banganandhu was able to rule for a few more years will remain an intriguing and recurring question forever.

The DG also spoke briefly of his mother, Begum  Nurjahan Murshid, who was a close associate of Bangabandhu and Hussain Suhrwardy, dating back from their Calcutta days, especially from the time of the Great Riots of 1945.

The gathering opined that enemies of Bangladesh were numerous and remained active. It was therefore our duty to remain vigilant against any efforts that might undermine our founding principles.

The meeting was attended by the researchers, administration staff, publication staff, IT professionals and librarians working in BIDS.

Further discussion in the same direction can be found in a recent article written by Dr. Binayak Sen (https://samakal.com/tp-kaler-kheya/article/2008504...f or the Daily Samakal. In this article Dr. Sen eloquently described “Bangabandhu's aspirations for democratic socialism and an egalitarian society based on the constitution of 1972”.